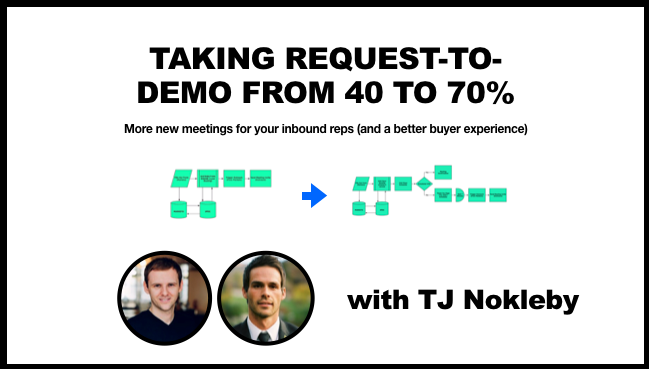 In this discussion, we go into how TJ Nokleby built a process to generate more new meetings for his inbound sales team at Grow, while creating a better experience for Grow buyers. 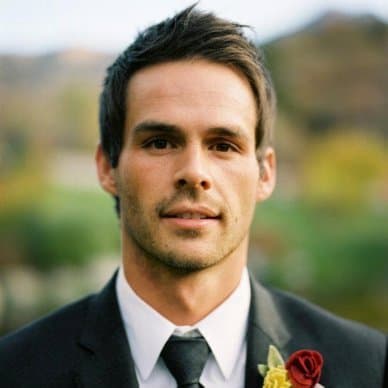 Get Our Thoughts Delivered

Join 20,000+ others in getting access to the latest sales leaders and research. We don’t spam.

Thank you! Your submission has been received!
Oops! Something went wrong while submitting the form.

In this interview, we go through the exact TJ and his team made to double Grow's Request-to-Demo conversion rate–taking it from 30 to 40%. And then from 40% to 70%.

Included is the thought process, a view into the analytics as well as the technology set up that got this done within around a week of time.

Also shout out to Michael Tuso, Nicolas Vandenberghe and the team at Chili Piper for the intro to TJ.

Their main customer segment is Founders, Sales/Marketing Leaders and agencies. These customers primarily comes inbound (90% inbound) and likely already have a sales or marketing stack implemented.

How Grow's initial inbound sales process worked is capturing leads on a Marketo form, which would get synced back to SalesForce with Distribution Engine.

After inputing their information their buyer would be sent to a Thank You Page.

And after reaching the Thank You Page would get a meeting invite that's been processes through Outreach.

The reason TJ would send emails from Outreach instead of Marketo is it gives reps more visibility into what's happening in a conversation.

Given Grow reps live in Outreach, they're able to see who's opening an invite, know if there are any lead routing issues and then figure out how best to follow up.

Given the speed of the sync process, the email would get processed quickly using Calendly. Overall, this process would lead to around 30% of leads moving to booked calls.

When Grow was focused was on generating a high volume of leads, their Demo Scheduled Rate took a hit.

When they started tightening up the email invite process, targeting the right customers, they were able to move from 30 to 40% in June and July.

Although buyers really wanted to talk to Grow could get through it a process that took multiple steps, some buyers with other projects on their mind, might not.

In their new process, Grow made a couple changes based around an implementation of Chili Piper:

Rather than Distribution Engine handling the routing, a Chili Piper pop opens up and quickly checks to see if an account is owned by a rep.

Rather than someone needing to go through multiple steps, they can immediatley book a time on a reps calendar which looks like so:

Once a time is selected, they're then routed to a Thank You Page.

If the Chili Piper scheduler is exited however, they get thrown onto a different Thank You Page that's very much like the previous flow.

At this point, what happens is after a 7 minute delay, they get put into a campaign in Marketo. This campaign verifies the demo has not been scheduled so the rep can be informed.

This process is meant to help avoid having a rep send a second email. It's this process that together, took Grow from a 40% to 70% Request-to-Demo rate:

Given the implications of swapping out their lead routing, TJ describes how there were 8 people in a room in the meeting with Chili Piper.

With a Chili Piper implementation something to think about is it's not just the scheduler - it's also the calender invites which their reps and prospects use every day.

The big thing to watch for is making sure the software works before it's rolled out to sales. To do this, TJ spent some extra time going through and testing the full process from a buyer and rep perspective.

All in, implementation for the full process took around 1 week - which considering what was involved is extremely fast.

Although TJ doesn't login to Chili Piper consistently - given he uses Grow for metrics, he did use Chili Piper's dashboard, router and the feed as a spot check during implementation.

Why Grow didn't want to focus on generating more leads and instead optimize the funnel.

Given TJ's goal was more at bats for the sales team, it's worth asking: why pay for a new product and go through the pain of implementation?

In TJ's view, it's a balance. Based on their own analysis Grow realized their most valuable customer segments weren't necessarily the users they were attracting.

As Grow looked to narrow their focus on their best customers, it made sense to look for ways to optimize the buying experience with their existing budget and timeline.

In the email sent before a booked call, Grow reps usually ask for more information, which does provide a filter.

Grow also appends data from Zoominfo and other data providers to get a better sense of who's joining before a call.

Are there any future optimizations TJ is considering?

Demo held rates are good, but TJ is thinking about ways to improve this through reminders. They're also going to be implementing a call now feature that allows a rep to immediately receive a call.

Now that Grow recently implemented a true free trial, TJ and team will also be working on ways to optimize the experience for buyers without being too salesy.

Try TJ on LinkedIn and mention you saw him on Advice.

Get Our Thoughts Delivered

Join 20,000+ others in getting access to the latest sales leaders and research. We don’t spam.

Thank you! Your submission has been received!
Oops! Something went wrong while submitting the form.
Company
Blog
Legal
TermsPrivacy
Contact Us
Questions? Email us at hello@advice.io
Copyright © 2020 Advice.io, Inc